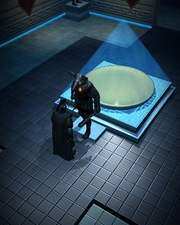 A guardian encountered at Zamedi

Guardian is a magical entity. Among ordinary men, they are known simply as demon. Two guardians can be encountered in two different places: the tower at Zamedi and the ruins at Inferiae.

Warning: This section may contain spoilers for the game.

Guardian is an entity created through the engineering feat of the Magi. Its form appears to be a bull-headed humanoid with four arms. Its eyes emit a yellow-ish glow and a nose-ring is pierced between its nose. Its four arms are able to conjure swords in an instant. Its form is thought to be a tribute to Apis legion. The guardian's black, hardened skin appears to common eyes as if it were made of stone, as most would confuse it as a statue at first. But the archives at Zamedi Tower reveal that it is actually made of some sort of metallic crystal grown around the power core that sustains and animates the entity. The guardian is able to think independently, form complex thoughts, and talk eloquently in human speech. However, its mind seems to be composed of computer-like processors. One guardian at Inferiae lost a part of its head, rendering it incapable of coherent human speech, and resorting to robotic input-output feedback.

The entity is created to assist the Magi in their magical experiments, notably the one that eventually led to The Great War. When discovered by the player, the guardians have been left alone by its masters for 382 years.

You can fight him or help him in getting his freedom. He also can be inquired about facts from the past if you learn his weaknesses in the Top Console at the tower.

“I’m looking for the temple of Thor-Agoth. Can you help me find it?”

“Ah, I understand. Another degeneration of your language. Agathoth, my master called him. Tor-Agathoth. Tor was some kind of honorific, though the Magi rarely used it. They built a ziggurat for him, I was told – an entire complex, though I don’t know where. As I said, I’ve never left this tower."
“Look for my master’s records. Perhaps, they could be of help."

“Are you a living thing? A mechanism? A magical construct?”

"If by ‘living thing’ you mean that I’m able to think independently, then yes, I am indeed a “living thing”. If only my former master could express himself so eloquently Why were *you* created, human? No, don’t bother trying to answer, I’m sure it was something boringly mundane. Physical lust or some such biological concern. I, however, was created for a higher purpose. to assist my master in his magical experiments, to plumb the mysteries of the universe. Stone can withstand so much more than flesh, which needs only the slightest excuse to split and part from bone.”

“What happened to your master?”

“I don’t know. He left after the attack, but never returned. He wasn’t the type to let a servant into his confidence. I can only assume that he was killed – knowing him, only death could have kept him from returning to his work"

“Who was your master?”

“Yes, House Crassus. Have you heard of it? Does it stand still?” asks the demon with sudden hope.

“It does, but I have a feeling it’s not as you remember it. Lord Meru is too busy calling for a return to the worship of the gods and the restoration of their temples to be concerned with, well, whatever you are.”

“The worship of what?” asks the demon, looking very puzzled.

“The gods? They’re…well, they’re the gods. The beings who created the universe and everything in it? Who guide all our fates? They came to our world from their otherworldly realm in the hour of the Empire’s greatest need, to rescue it from the barbarians who sought to destroy it. At least, that’s what we’ve been told.

“Otherworldly is about the only thing you got right,” chuckles the demon. “What happened to your kind, human? How did you fall so far?"

“I don’t know. No one does. If they weren’t gods, what were they then? Why did they come, if not to aid the Empire?"

“They didn’t come. You brought them here. Your Empire’s greatest triumph and most terrible mistake. You created your own gods and in doing so, fashioned your own downfall. It’s rather poetic, don’t you think?”

“What do you mean by ‘created your own gods’?”

“Does the word ‘created’ confuse you? Am I not a living proof of how far your Art reached, at its height??

“I do not know all the details – my master wasn’t the type to indulge curiosity, but he did discuss this project with other Magi while I was present. The greatest hurdle was to bring these gods, as you call them, here, to this plane. They laboured for over a year to locate a suitable conduit, but eventually the problem solved itself, the gods were given bodies, and the project moved forward again. And then the war started and, well, here we are."

”Given bodies? Human bodies? I don’t understand, don’t the gods have their own bodies?”

“Yes, given bodies. They were not of this realm, human, they did not have physical existence as you understand it. They required vessels to anchor their essence to this realm.”

"Whose bodies were they given?”

“Are expendable people in such short supply now? People no one cares about, no one would miss? Have things really changed that much?”

“How many gods did they bring?”

“Seven. There were seven.”

"Were the Magi really trying to create gods?”

“I do not know exactly what the Magi hoped to achieve, but I can assure you that men like my master wouldn’t create anything they didn’t believe they could control.”

“So, the gods were here before the war?”

“Of course they were here before the war! Cause comes before effect, does it not?”

“Wait, you mean that the gods started the war?”

“No, why would they? They were quite happy with the arrangement, they’d gotten what they wanted. No, the war was fought because of the gods, not at their behest. You’ve heard of the Qantari, I assume?”

“I’ve heard of them, yes, but few records remain of them, besides that they were our enemy. How do they fit in?”

“How do they fit in?” the demon looks at you in surprise. “Why, they started the whole mess. They were the ones who made contact with the gods in the first place. But they couldn’t quite figure out how to bring them here, to this world, from their own. So they came to your Empire for help. It was your Magi who found a solution.
“For a while this academic alliance was proceeding perfectly, scholars from both powers working in harmony. My master even began spending most of his time at Al-Akia. But such things do not last with you humans, do they? One day, the Magi were all up in arms over something, they never told me what. But they blamed the Qantari for it, Blame turned to anger, then violence. They attacked the Quantari. So of course the Quantari didn’t take that lying down. When their fleet arrived, that’s when the war began in earnest.”
“That’s where they brought forth the gods and gave them flesh. An entire town built for this sole purpose – if you can imagine such a wonder.”

“The Magi and the Qantari’s Servants, of course. Working together.”

“Their Magi. Their full title was ‘The Servants of the Power of Creation’. An awkward phrase in your language. In native Qantari it is a single word, much more elegant, I assure you.”
“For a caste who referred to themselves as ‘Servants’, they were rather arrogant and conceited. Not that your own Magi lacked arrogance, but the Qantari turned it into an art form.
“Perhaps it was the fact that the Magi were sworn to serve the Emperor that kept them at least somewhat grounded. The Servants served nothing but their own interests, ironically.”

“And what happened to the gods?”

“I wouldn’t know. After the town of Zamedi was destroyed and my master left, my only link with the outside world was severed. Judging by your questions, I assume that the Empire has fallen and the Art of the Magi is gone from this world.”

“What makes you think that?”

“It’s really not that hard to deduce. You’re the first visitor to this tower in 382 years. The towers were never intended to run this long without maintenance. Yet no one has come, and though this tower and its power source remains, no magus has come to claim it as his own, either. This tells me two things: that there are no magi left and that access to the tower is restricted. The only reason that access would be restricted is fear. Men fear what they don’t understand, what they no longer have the knowledge to understand."
“And it is clear from your questions that you haven’t the slightest idea of what is around you, not the workings of this tower nor the nature of constructs such as myself, not even of your own people’s history. This suggests that few records survived the war, and that your civilization has undergone a significant regression. A sad turn of events, but not an unexpected one.”

“Thank you for the answers.“